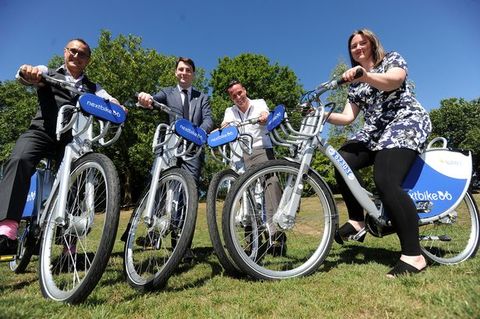 The bike-sharing scheme could be rolled out to the rest of the town.

Guildford’s first ‘Boris bikes’ are now available at the University of Surrey for people to rent and use.

You can rent a bike from the university campus, travel with it and use it for however long you want (as long as you pay for the time), and return it to a bike rack at the university.

The bike-share scheme operated by nextbikes charges pay-as-you-go riders £1 for every 30 minutes. Members (£30 a year for university students/staff and £60 for members of the public) get the first half hour free, and are charged 50p for every 30 minutes afterwards.

50 bikes and eight docking stations have been installed at the University of Surrey but project leaders said there are plans to expand the scheme to cover the rest of Guildford town.

If the scheme at the university is successful, docking stations could be installed at the business park and the train station, Mr Scriven revealed.

The scheme has taken shape at the university thanks to the Santander Cycles University Challenge, a competition where five universities competed to raise money to cover the upfront costs for a cycle hire scheme.

The top two universities had their capital costs for the schemes covered by Santander, and the University of Surrey was awarded a runner-up prize of £75,000by nextbike. A further £25,000 turned the 50-strong cycle-share scheme into a reality.

The scheme has been supported by Guildford Borough Council (GBC), which is working on the Sustainable Movement Corridor Project to improve routes between Surrey Research Park, Royal Surrey County Hospital and the train station.

The council is also hoping to launch its own community bike share scheme to link with and complement the university’s, according to Matt Furniss, GBC deputy leader and lead councillor for infrastructure and governance.

Nextbike UK provides bike-sharing schemes across the country, but managing director Mr Scriven is from the Farnham area in Surrey.

He said at the scheme's launch on Thursday (August 2): “I was very keen to get a scheme close to where I live.

“We may look at rolling this beyond the university through crowdfunding schemes, perhaps we can persuade Guildford Borough Council and Surrey County Councilto expand it.”

When asked how he felt about the scheme which is finally up and running, he said: “I am absolutely delighted. The scheme stands or fall by your partners and the level of collaboration, and the University of Surrey are just an incredible partner. I feel so optimistic. This scheme is going to do well."

Ed Nelson, the university’s transport manager, was responsible for entering the university into the Santander competition and led the team of crowdfunders.

“I’m delighted, excited and determined that we really make the best of this top scheme.

“Expanding the scheme to the rest of Guildford is very much the hope and ambition. We do not think 50 bikes is enough. We need them in the railway station in town.

“All docking stations are on university land, so we do recognise usage will be predominantly students. We will be lobbying nextbike and local authorities to make that happen as soon as we can.”