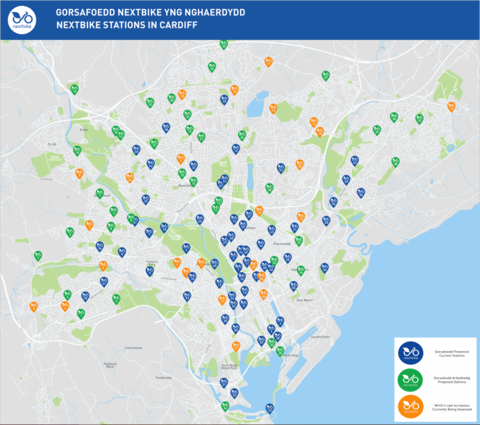 Another 500 bikes will also be coming to the capital

Nextbike have announced where dozens of new docking stations will be placed in Cardiff .

The bike scheme is adding 38 new stations to the capital this year and is bringing 500 extra bikes.

The company, which is celebrating its first anniversary in Cardiff, said the plans are to keep up with growing demand.

Now a common sight in the city centre, the new stations will also expand the network further out across Cardiff - including Danescourt and Radyr as well as St. Mellons Business Park and Llanishen railway station.

A further 26 potential stations are also currently being assessed by Cardiff Council.

This is the full list of new stations coming this year:

This is the full list of the stations being assessed

In total there would be 1,000 bikes and up to 126 docking stations across the city.

The scheme sees users pick up a bike at docks around the city. The charge depends on how long they have the bike for.

The standard pay-as-you-go charge is £1 for 30 minutes riding. Monthly and annual price plans are also available.

Nextbike MD Krysia Solheim said: "The demand for bike share in Cardiff has been phenomenal since we officially launched here last year with the residents of the Welsh capital making over 10,000 journeys between them each week!

"We know that the current fleet is not large enough to satisfy current demand, so we’re excited to be adding new bikes to the collection. The community of Cardiff has wholeheartedly embraced the scheme and it’s largely thanks to public demand that the scheme has grown so quickly."

Since the initial launch 12 months ago, Nextbike has doubled the number of bikes available in the city from 250 to 500 and installed a further 37 stations alongside the original 25.

The scheme is backed by Cardiff Council and financially supported by the Welsh Government. It is also the cycle firm's most successful operation since it started in the UK in 2014.

Cardiff Council cabinet member Caro Wild said: "The Nextbike scheme in Cardiff is a very visible sign of how we are changing the city for the better. The demand and popularity of the scheme has meant that we have very quickly been able to double again the number of bikes and stations.

“What is particularly pleasing has been the popularity of the scheme in some of our less affluent communities, and this latest expansion sees a real focus on making sure the bikes are accessible to even more people from across the city."