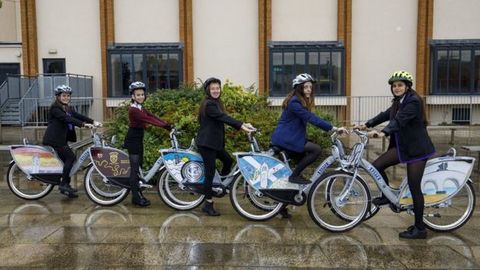 The project will involve 10 bikes stationed at each of three schools, with access to a further 160 stationed elsewhere in Stirling.

Operator nextbike has dropped its normal policy that only over-18s can take out membership.Membership of the scheme will be free for pupils for the first 12 months.

Forth Environment Link (FEL), a charity, has set up rental stations at Bannockburn, Stirling and Wallace high schools. A fourth station will follow at St Modan's High School.

FEL active travel development manager Shirley Paterson said: "There is a distinct drop off in cycling numbers between primary and secondary school."So we're targeting pupils aged 14 and over to get them back on their bikes before they head off to the world of work or further study."By incorporating cycling into their daily lives now, they're much more likely to become active adults."The first group of users will include 18 pupils from Bannockburn who will cycle to local primary schools where they help with PE lessons.Stirling Council's environment committee convenor, Jim Thomson, said: "The introduction of the bike share project across our schools is the latest in an exciting series of initiatives in supporting active travel, creating a sustainable Stirling and protecting the environment."There are a wide range of health, educational and environmental benefits of cycling to school or for leisure and it's fantastic that there has already been a great response to this innovative scheme by our young people."

Operator nextbike already has a presence in Stirling and UK managing director Krysia Solheim said it was keen to attract younger users."We're thrilled to be launching the UK's first-ever bike share for school pupils in Stirling," she said."We often have requests from existing customers and young people about lowering our customer age limit to include older teens, so we're excited that this has now become a reality."We know that if sustainable transport options such as cycling are adopted from an early age, it can help to form habits that last a lifetime and we're hoping that's what will happen in Stirling."Transport Scotland has supported the project with a £103,560 grant.Transport minister Michael Matheson said: "This scheme directly supports our ambition to build an active nation, where more people have opportunities to walk and cycle than ever before, and I look forward to seeing Stirling grow into an even more cycle-friendly city."