ScottishPower revealed as sponsor for first fleet of e-bikes 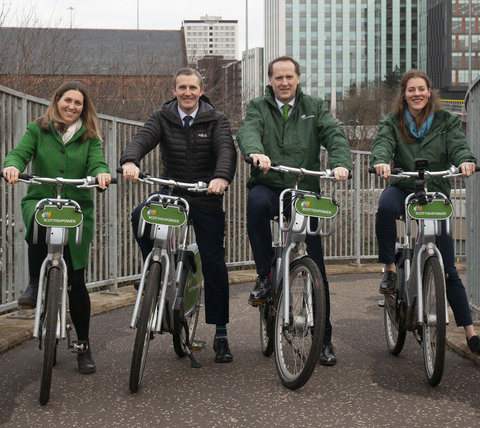 ScottishPower will sponsor nextbike’s first fleet of e-bikes in Glasgow as part of its Zero Carbon Communities (ZCC) campaign to help support communities to deliver on climate change.

The fleet of 63 bikes and 21 stations was launched by nextbike in the city last year. More than 6,600 journeys have already been made on the city’s e-bikes in their first four months and the new ScottishPower sponsorship will help to raise the scheme’s profile and increase use.

The scale of the challenge in Glasgow is clear. According to the Capital Economics forecasts, the city will need to install more than 175,000 charging points between now and 2030 to reach Net Zero, including nearly 17,000 chargers in non-residential areas. Capital Economics estimates the costs of installing these to be £298 million, and also estimates that converting Glasgow to electric heating will require c. £1.4 billion for the installation of electric heat pumps in over 244,000 homes.

Glasgow’s energy network will need considerable investment to support these changes, with Capital Economics estimating that £648 million will be required to achieve Net Zero. By investing in a planned and strategic way, SP Energy Networks believes there is potential to reduce significantly these network investment costs by 30%-40%.

As part of plans to modernise the city’s electrical network infrastructure, SP Energy Networks is investing £20m between now and 2022 to facilitate an increase in available network capacity and to support regeneration initiatives.

At the Glasgow Zero Carbon Communities launch, ScottishPower today announced a new partnership with nextbike to sponsor Glasgow’s first fleet of e-bikes, enhancing the city’s green transport offer. ScottishPower will sponsor 63 e-bikes and 21 charging points across the city. Given Glasgow’s hilly terrain, the city’s first e-bikes are ideal in helping to transition towards an electric future.

Keith Anderson, Chief Executive of ScottishPower, said: “With the UN Climate Change Conference, COP26, coming to Glasgow later this year, the city will be able to showcase its commitment to reaching Net Zero on a global stage.

“To reach Net Zero, we’ll all need to make changes as we move away from the fossil fuels that power our cars and heat our homes today. We’re committed to working with local communities to help them understand the best ways to decarbonise.

“We’re launching our Zero Carbon Communities campaign today to set out a road map for helping Glasgow in the drive to Net Zero. Upgrading heating systems and shifting to electric vehicles will require big changes, but they will have compelling social, economic and environmental benefits.

“Our sponsorship of Glasgow’s first fleet of e-bikes is a great example of how we can use electrical vehicles to reduce pollution.”

An increase in the use of electric vehicles will significantly help Glasgow reach its net zero goal by 2030. Switching from a daily car journey to an e-bike can save an average 249g of CO2 for every 1km travelled.

Last year, Scotland’s first low-emission zone was introduced in Glasgow. This November, Glasgow will be the epicentre of international climate change dialogue when it hosts the globally renowned United Nations COP26 Climate Summit, which will bring together 200 world leaders and 30,000 influential delegates to debate climate change solutions.

“I welcome this latest report from ScottishPower, which is a milestone moment in their partnership with Glasgow City Council to make Glasgow the UK’s first ‘net-zero’ city. This work is crucial, because we know that Scotland’s world-leading and legally binding net-zero target cannot be met by Government alone. This continued partnership approach between businesses, local authorities and communities is exactly what is required to respond to the climate emergency and improve the air quality in our cities.

“The Scottish Government is doing its part. We’ve already invested over £30 million since 2011 to establish our comprehensive ChargePlace Scotland charging network. Our public network is largest in the UK, outside London, which we have developed in support of our commitment to phase out the need for new petrol and diesel cars and vans by 2032. We have also committed to investing over £500 million to support bus priority infrastructure measures and, in addition, we have maintained our record funding for walking and cycling which has helped support the public hire e-bike schemes here in Glasgow, in Edinburgh and across Forth Valley.

“It is encouraging that ScottishPower shares our view of the importance e-bikes can play in encouraging modal shift and reducing carbon emissions, and have committed to sponsoring the nextbike scheme, in order to promote its benefits to even more people across Glasgow.”

Talking about ScottishPower’s e-bikes sponsorship, Sam Coldham, UK Business Development Manager at nextbike, said: “We’re thrilled to be welcoming ScottishPower as sponsors for our e-bike fleet in Glasgow. We know that bike share can play a vital part in reducing car dependency in our cities, and we’re excited to be playing a part ScottishPower’s plans to turn Glasgow into a Zero Carbon Community. It’s more important than ever that people start to think about how they can reduce their own carbon footprints – and thinking about the way we move around our cities is a great place to start.”

The Zero Carbon Communities initiative is also being rolled out across Liverpool, Edinburgh, Fife, Dumfries and Galloway, East Ayrshire, Cheshire and Warrington, and the Isle of Anglesey.