Public can have their say on Penarth e-bike scheme expansion 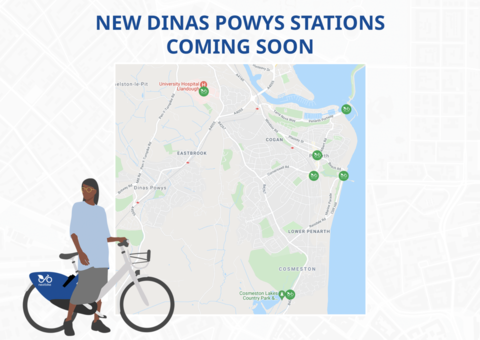 Nextbike’s popular e-bike scheme in Penarth is set to expand with new docking stations in Dinas Powys – and the public have been asked where they would most like to see them installed.

When the fleet of 50 e-bikes and five stations was launched in November last year thanks to funding from The Vale of Glamorgan Council, it became the first public electric bike share scheme in Wales.

Now thanks to its success, funding has been made available to expand the scheme into Dinas Powys.

An online public consultation is being launched by nextbike today  (Monday May 10), where people can say where they would like to see a station installed and why.

Nextbike UK MD, Krysia Solheeim, said: “The scheme has proved incredibly popular to date, with more than 8,000 journeys made and 32,000 km cycled so far. Thanks to its success, we want to expand the station network to allow convenient access to even more people.

“Bike share schemes can have such a positive impact on people’s lives in many ways, from the physical and mental health benefits that cycling brings, to the reduction in congestion and CO2 emissions that comes from cycling instead of using motorised transport.

“We’re really keen to hear from the public about where they would like to see the new stations situated. Our bike share schemes are there to benefit the whole community, which is why we want to hear from as many people as possible.”

Nextbike docking stations have to be close to popular destinations such as existing transport links, job centres, supermarkets and other shops; be in an area of high footfall; be highly visible and easy to find; have enough space to allow safe movement of pedestrians and people with limited mobility; and be accessible by van or bike trailer to allow the nextbike service team to maintain the bikes and stations.

Final decisions will be made based on the above criteria, in addition to the ability to get power to the locations, which is determined by power providers.

Councillor Peter King, Cabinet Member for Neighbourhood Services and Transport Vale of Glamorgan Council, said: “The nextbike e-bike hire scheme in Penarth has proved extremely successful.  Since its launch, the hire of the bikes has been steadily increasing.

“Two additional docking stations in Dinas Powys will complement the existing nextbike network within the Vale of Glamorgan and provide an additional sustainable transport link between these three areas. I would encourage Dinas Powys residents to respond to the consultation as it’s important they are located where they are accessible to as many people as possible.”

While the Penarth bikes can currently only be rented and returned to Penarth stations, the ambition is to eventually link the scheme to nextbike’s Cardiff fleet, meaning commuters will be able to use the e-bikes to make the journey between the town and the city with ease.

E-bikes are a combination of a conventional bike with a motor that take some of the effort out of pedalling for the rider. With top speeds of 25km per hour, the e-bikes can cover greater distances in less time and with less effort than conventional cycles.

The consultation runs until May 30. To take part, visit www.nextbike.co.uk/en/dinas-powys or get in touch with suggestions on social media