Partnership gears up to help reduce cycle crime in Cardiff 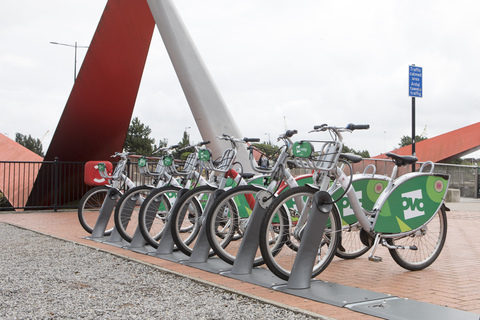 A new partnership between 19 organisations has been established in a bid to reduce high rates of cycle crime in Cardiff.

Officials hope the newly-formed Cardiff Cycle Crime Reduction Partnership (CCCRP) will help to tackle problems including bicycle thefts and vandalism across the city.

Last month, nextbike was forced to temporarily remove its popular OVO Bikes bike share fleet from the streets of Cardiff and the Vale of Glamorgan after sustained bouts of vandalism and thefts left its fleets depleted.

Mark Cleland, British Transport Police Superintendent and Lead on Cycle Crime in the UK, reached out to nextbike to offer support in helping establish the CCCRP. The model has been successfully implemented in multiple cities across the UK. Gwent Police implemented the Partnership in Newport in March 2021 and, comparing November 2020 to November 2021, have achieved a 29% reduction in bicycle theft across Newport.

Gwent have utilised ‘Trap Bikes’ to target offenders in theft hot spots. Bikes are marked with forensic marking solution and fitted with technology to assist officers in retrieving the police owned bikes once they have been stolen. Numerous successful deployments of the ‘Trap Bikes’ resulted in several offenders being arrested for bike thefts. In one instance 58 suspected stolen bikes were seized from a single address with many returned to victims.

In addition to this work, Gwent Police have run Smartwater bike marking events where nearly 1,000 bikes have been forensically marked since March 2021. Marking the bikes with Smartwater allows them to be easily identified and returned to owners in the event of them being stolen. Deterrent signage has been placed throughout Newport highlighting the use of ‘Trap Bikes’ and this has been supported with a bike security social media campaign.

Working in partnership with organisations who are part of the Newport Cycle Crime Reduction Partnership has provided opportunities for information sharing and intelligence gathering as well as ensuring initiatives around cycle security are widely promoted and available to all cyclists.

The Cardiff CCRP met for the first time earlier this month and partners will meet regularly, pooling resources and implementing practical strategies and events, such as hosting bicycle marking events for the public and putting trackers on personal bikes with the aim of reducing bike thefts.

Superintendent Cleland said: “Cycling is good for the environment and our health, but cycle crime has the potential to impact on that and so to ensure we can encourage people to cycle, we need to tackle those who feel they can vandalise and steal bikes across the UK.

“The Cardiff Cycle Crime Reduction Partnership means that everyone with an interest in tackling crime works together to be proactive in targeting criminality while educating cyclists on good security whether at home or elsewhere.”

Nextbike UK MD Krysia Solheim said the new partnership was a positive step forward for cycling in the area.

“We see the CCCRP as an important part of the solution to the problems we - and other bicycle owners in the area - have been facing across Cardiff and the Vale of Glamorgan,” she said.

“We completely support Cardiff’s ambition to become one of the UK’s best cycling cities and we’re determined not to let the small minority of people ruin it by stealing and vandalising bikes. While the crimes may seem petty to some, the impact can be significant.

“Bike share - and cycling in general - provides a low emission, healthy and affordable way to get around Cardiff and the Vale of Glamorgan and we know that the withdrawal of our schemes has had a huge effect on our customers.

“We can’t wait to relaunch our OVO Bikes scheme in the New Year - and hopefully thanks to this new partnership, alongside other measures we will be introducing, we won’t see a repeat of the behaviour we have witnessed over the last few months.”

Ms Solheim said a survey was being launched to engage the cycling community in Cardiff and the Vale of Glamorgan, allowing people to have their say on the topic.

“We want to hear from as many people as possible about their experiences and their thoughts on what could help prevent cycle crime in the future. Public feedback will help us shape our actions over the next 12 months,” she added.

Inspector Jeff Lewis, from South Wales Police, said: “Anyone who has had their bike stolen or damaged, knows how upsetting it can be as well as costly and an inconvenience. South Wales Police is committed to working with partners including Cardiff Council, British Transport Police and nextbike to prevent and detect bike theft and vandalism. Cycling is the most environmentally-friendly way to get around our capital city and we want to play our part in ensuring Cardiff is one of the best cycling cities in the UK.”

Cardiff Council’s Cabinet Member for Strategic Planning and Transport, Cllr Caro Wild, said: “Cycling in Cardiff has really taken off over the last few years, with thousands more people choosing this efficient and sustainable way of getting around. However, there is no doubt that theft and vandalism put many people off. We’re really pleased to see all of these partners coming together to try and tackle this issue alongside the public.”

Feedback on the establishment of the CCCRP from the new members has been positive and supportive.

Cardiff University’s Travel, Transport and Parking Services Manager, Richard Wintrip, added, “We know that OVO Bikes are popular with our students and they've been sorely missed over the last few weeks. We're pleased to be part of the new CCCRP - the more coordinated eyes and ears on the ground we can have, the better for cycling across Cardiff.”

To report bike theft or vandalism, please contact South Wales Police by one the following means:

If you are witnessing a crime in progress, suspects at the scene or a person in immediate danger, please call 999.

For practical advice on how to keep your bike safe, please visit the South Wales Police website: www.south-wales.police.uk/cp/crime-prevention/keeping-vehicles-safe/how-safe-is-your-bike/