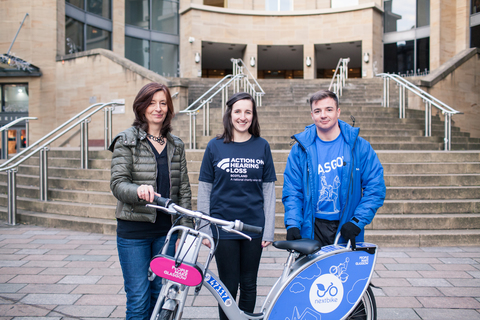 Four charities will get a slice of the pie this month after nextbikers across the UK raised almost £900 through the bike share firm’s annual charity campaign.

In the run up to Christmas, nextbike halved the price of its annual subscription to just £30. And for every subscription sold, £15 was then donated to the charity of the customer’s choice.

The organisation was chosen through public vote for the second year in a row as part of the firm’s festive cash giveaway in December.

The charities were chosen by the public across the UK with Action for Hearing Loss Scotland, ARC Cardiff, bereavement charity 2 Wish Upon a Star and cancer support charity Maggie’s Cardiff receiving the most nominations.

nextbike managing director, Krysia Solheim said she was delighted that nextbike was able to have made a difference in communities around the UK: “We’re passionate about local community here at nextbike so it was great to see the campaign was so well received.

“Each charity does amazing work in its community and we’re delighted to be able to give that little extra support.”

nextbikes are available 24 hours a day and users can register and hire bikes in just a couple of minutes. The cycle-share scheme is one of the cheapest ways to get around Glasgow, with fees starting from as little as 16p per day.

nextbike plans to continue expanding its network of schemes this year, with launches planned in the West Midlands and Portsmouth, as well as expanding its current fleets and introducing electric bikes into selected cities, starting in Glasgow.