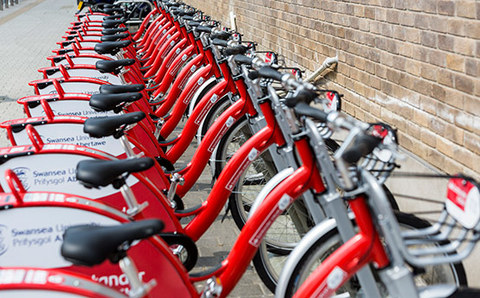 Leading bike share firm nextbike has made a record-breaking return to the streets of Swansea after the Covid-19 pandemic saw the scheme shut down earlier this year.

The Santander Cycles Swansea scheme recorded its highest ever rentals in August, with 3,327 - a milestone which was promptly broken in September, when 3,738 rentals were made. That’s an increase of 330 per cent on September 2019’s rental figures.

Nextbike UK MD, Krysia Solheim, said the figures were fantastic, especially after the scheme had an enforced break of three months from April – June.

Ms Solheim said: “With such unprecedented circumstances over the summer resulting in the temporary removal of the fleet, we didn’t know what to expect when we relaunched the scheme back in July, so to see record-breaking numbers has been amazing. It has really proved to be a small, but mighty scheme.

“It’s clear that many people in Swansea embraced a new-found love for cycling during lockdown that they’ve been keen to continue with. It’s the ultimate social distanced-way to travel, as people are still looking to avoid crowded public transport options to make their essential journeys.

“The spike in rentals is fantastic news for the city, as people opting to cycle instead of using the car or public transport means that they’re not only helping to reduce CO2 emissions and ease congestion, but they’re also boosting their physical and mental health too at a time when both are vitally important.”

The scheme’s green credentials are boosted even further thanks to the use of an environmentally-friendly electric bike trailer that the maintenance team uses to redistribute the bikes across the system on a daily basis.

Ms Solheim added: “By using an electric trailer instead of a van to move the bikes around, we’re really able to provide the most sustainable way to move around Swansea. We hope to see the cycling trend continue throughout the autumn and into winter.”

The scheme is run in conjunction with Santander and Swansea University and was first launched in 2018, after the University beat stiff competition to win the Santander Cycles University Challenge. Since then, the scheme has helped thousands of students, locals and tourists ride confidently around the city.

“We’re delighted to be able to provide University students, staff and the communities of Swansea and NPT with a safe, affordable and sustainable way of travelling locally during the pandemic.

“It’s fantastic to see the scheme really taking off and we very much hope to see more and more people switching from car to Santander Cycle to get around town - even during the Autumn and Winter months ahead.”

Dan Sherwood, Director of Marketing at Santander UK said: “We’re really pleased that the scheme could re-open again in July, with record numbers showing that many in the local community are benefiting from having access to the bikes, particularly during this challenging time.”