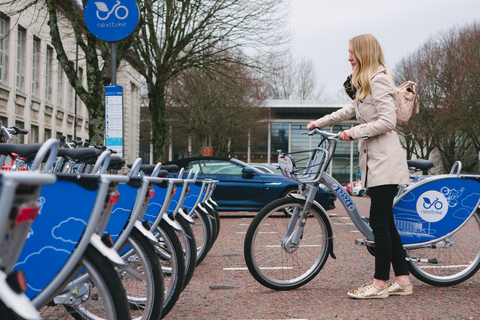 An in-depth review into Cardiff’s bike share scheme has praised the collaboration between partners, as well as the people of Cardiff and the city itself, for its record-breaking success.

With over 150,000 rentals since its launch in March, the scheme is nextbike’s most successful UK launch to date. Due to rising popularity, the firm recently announced that the Cardiff fleet will be increased to 1,000 bikes in 2019.

So, in a city where previous bike share schemes had failed, how did nextbike win over Cardiffian hearts and break their own records in the process?

According to independent researcher Beate Kubitz, there are three key elements in nextbike’s success.

“The nextbike scheme in Cardiff is supported by an excellent combination of partners, people and place,” Beate claims. “Each plays a substantial role in its success. There has also been a strong media narrative that has emphasised nextbike’s position in the community.”

Using a combination of data, interviews, and the cycle propensity tool - which highlights cycle flows and potential routes in a city, Beate conducted the research on behalf of nextbike.

“Seeing the bikes being used in Cardiff gave me a great insight into their use,” Beate explained. “I was amazed by the diversity. There were people of all shapes and sizes on the bikes, and not just one group of people using them. It also seems the more nextbikes there are on the road - the more other people want to use them.

“Added to this, the scheme was designed to work with local infrastructure, and importantly, it has integrated with local groups. It is not imposed onto the community, rather it is woven into it instead.”

According to the report, which has been published online, nextbike’s continued collaboration with Cardiff City Council, Cardiff universities and PedalPower is the most important takeaway.

“From its inception, it has always been about nextbike and the council together, creating a scheme that works best for the city,” Beate added. “Bringing in the universities and PedalPower have been great additions for usage and maintenance.”

The report also highlights that a sense of ownership in the city has maintained its popularity with the public.

“Where other city bike share schemes have failed, Cardiffians have worked together to make it better,” she added. “Where there has been issues with the scheme, the public tone is very much about looking after the bikes, their popularity and utility in the city.

“This is boosted by excellent and consistent communications across media and social media, which have built a constructive narrative around the scheme.

The report, conducted in August 2018, found that average rentals per bike per day were double the national average at 4.27 with students accounting for 66 percent of members and 17 percent of all rentals.

In addition, the report reveals 12 million trips by bike annually in Cardiff in 2017, with seven percent of people commuting by bike.

“Cardiff is a relatively small city and while there is still only a small number of segregated cycle routes, cycling in key areas of the city is relatively easy,” Beate added. “The city is compact which is useful for flow and visibility of bikes, and the stations have been strategically located to benefit commuters, students and tourists.”

“There is no one element to determine nextbike’s success in Cardiff,” Beate concluded. “Instead, a continued sense of care, community and conversation have played equal roles in integrating the scheme into the city. Other companies and schemes need to work in this way for success.”

To see the full report go to http://www.beatekubitz.com/#/narrative-network-and-nextbike/