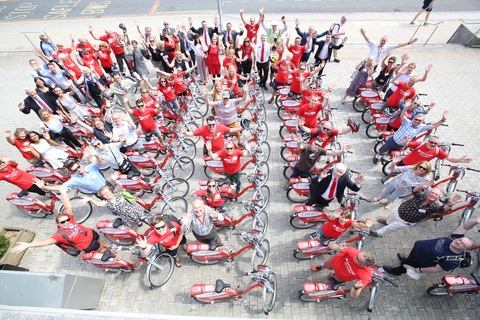 Swansea University staff, students, local businesses and members of the community have joined Vice-Chancellor Richard B Davies and Santander Universities UK Director Matt Hutnell to officially launch the start of a brand new bikesharing scheme for the city.

Santander Cycles Swansea was made possible following Swansea University’s fantastic win in the Santander Cycles University Challenge last December. During the energetic crowdfunding campaign, University students and staff, together with the local community and businesses came together to support the University in its bid to bring bikesharing to the city. The competition win saw the University secure an amazing £100,000 of Santander funding towards the capital costs for the scheme, which will be delivered by nextbike, one of the world’s most extensive bikeshare providers.

Bikesharing is becoming an increasingly popular concept, with new schemes popping up all over the UK. Swansea’s scheme, which is available to the whole community, as well as visitors to the city, is one of around 20 now running in the UK, and will initially provide 50 bikes to be located at 5 docking stations positioned along the main seafront cycle path at:

A sixth hub for Mumbles will follow later this Summer and discussions around scheme expansion plans are already taking place.

During the official launch, Professor Richard B Davies welcomed guests and scheme supporters from across the city and thanked them for their contribution towards bringing bikesharing to the city.

Professor Richard B Davies Vice-Chancellor, Swansea University said: “I’d like to thank all those people in the University, the local authority and the local community that have helped make this possible.  This scheme is a critical part of what we want to do as a university – not just making a difference for our students but making a difference in the wider community and the way people have engaged with this scheme has been particularly exciting.”

Swansea Council played an important role in supporting and securing the campaign, not only by pledging during crowdfunding, but also by providing landowner rights for the sighting of the hubs located at the Civic Centre, the Waterfront Museum and the Fabian Way Park and Ride.

Mark Thomas, Cabinet Member for Environment and Infrastructure Management, said: “We’re delighted to support the new cycling initiative which the university has been successful in securing. We have invested heavily in cycling infrastructure in the city over many years and as part of our active travel plan commitments we are continuing to look at ways to expand and improve the cycle network across Swansea.

“This new scheme will enable the growing number of students who are choosing to study in Swansea to benefit from the vast network we have and use the bikes as an excellent mode of transport and help contribute to our green aspirations in terms of transportation.”

During the launch, Matt Hutnell, Director, Santander Universities UK celebrated the continued partnership with the University. He said: “We launched the Santander Cycles University Challenge with the aim of benefitting local communities so we are delighted to be introducing the scheme to the people of Swansea who demonstrated such strong support throughout the competition. Our relationship with Swansea University began in 2013 and since then our funding has provided support to help students develop their business and entrepreneurial skills. We are delighted that the Santander Cycles scheme will enable the University and the local community to further benefit from our strong partnership.”

The scheme launch coincides with the 70th Anniversary of the NHS. Professor Keith Lloyd, Head of Swansea University Medical School said:“It is timely that the Santander Bike Scheme is launched at Swansea University as we celebrate 70 years of our glorious NHS, we are working to ensure it can not only survive – but thrive for the next 70 years.

“At Swansea University Medical School we are training tomorrow’s doctors, life scientists and healthcare professionals to understand and encourage the importance of taking responsibility for your own health and wellbeing and supporting physical activity is an important part of that.

“Our research through projects such as ACTIVE is providing new insights and a better understanding of the barriers to physical activity and is providing recommendations into developing new ways to tackle the growing problem of inactivity – especially in young people.”

Following the formal launch in the University’s historic Fulton House Refectory, guests moved outside to wave off a team of volunteer riders clad in Santander red as they headed off to deliver the 50 bikes to their respective docking stations.

The bikes are now in place and ready for all to use. More information about registration and prices is available on the scheme website: www.santandercycles.co.uk/swansea.