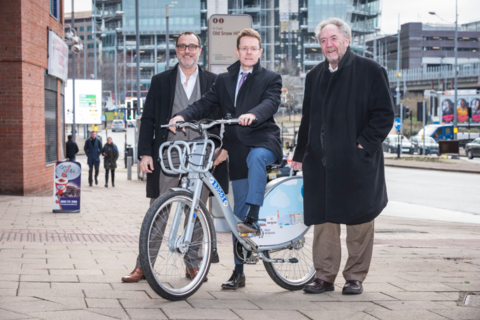 The world’s most extensive bike-share operator, nextbike, is bringing 5,000 bicycles to the West Midlands after being chosen to operate the UK’s largest docked bike-share scheme outside of London.

Transport for West Midlands announced the news today (Tuesday March 20) alongside West Midlands Mayor Andy Street and the West Midlands Combined Authority. The landmark scheme will bring 50 jobs to the region, with posts including area managers, van drivers and mechanics.

Bosses at nextbike said the first bikes will be hitting the streets in September this year, when 2,000 are installed across Birmingham, Coventry and Wolverhampton. The remaining 3,000 bikes will be rolled out in phases that will also include Walsall, Sandwell, Dudley and Solihull in 2019.

Docking stations will be located around key sites in the towns and cities involved, with bikes available 24 hours a day. Annual membership to the scheme will cost just £30 per year, meaning riders can access the bikes for as little as 8p per day. Swift card members will be able to access the bikes as part of their regular subscription. The bikes will also be free for the first 30 minutes to people who sign up to Whim - the new smart travel service that is launching in the Midlands next month.

The bikes will feature advanced technology and enhanced security features, including integrated front locks and GPS tracking, that makes using them easy for users.

nextbike and TfWM are currently in discussion with a number of global brands interested in working in partnership to sponsor the scheme.

Julian Scriven, nextbike UK MD, said: “We’re absolutely thrilled to be bringing nextbikes to the people of the West Midlands. We are able to offer the most technologically-advanced and forward-thinking bike-share scheme and fleet in the UK and it’s amazing that the people of Birmingham, Wolverhampton, Walsall, Sandwell, Dudley, Solihull and Coventry will be able to benefit from it.

“The interconnectivity it will offer is going to be brilliant, it will really help to make journeys across the Midlands seamless. People will be able to take a nextbike to start their journey to get to their local train station, hop on the train, and pick up another nextbike to finish off their journey at the other end. No more having to lug a bike on public transport, or worrying about finding a parking space at the train station.

“We will be creating more than 50 new jobs across the area and we will be partnering with the Walsall-based Steps to Work charity to help fill the roles. They work with long-term unemployed and young people currently not in education or employment amongst others, and these are groups that we are passionate about reaching, retraining and recruiting here at nextbike.

“Although this is a fantastic initiative for Transport for West Midlands, and for nextbike, we don’t see the scheme as belonging to either organisation. We firmly see it as belonging to the people of the West Midlands and we hope the communities will take the bikes to their hearts.

“We will be offering Bikeshare4all across the West Midlands, which will mean heavily discounted membership and use of the bikes for the unemployed and other economically-deprived people to ensure that the whole of the community is truly able to benefit from the bikes.

“On a personal note for me, I’m a local boy who grew up in the Midlands and ever since I joined nextbike I knew I wanted to bring the bikes back home. It’s going to be a very proud moment being able to use the scheme with my family and friends. I can’t wait to see my mum and dad on a West Midlands nextbike!”