GLASWEGIANS CYCLE AROUND THE EQUATOR 28 TIMES 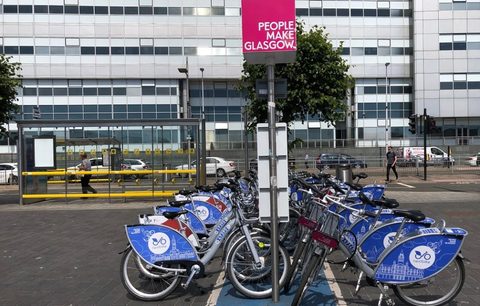 Forget the latest UK winner of the Tour de France – Glasgow has its own biking champion.

An incredible 1,125,000km have been clocked up on the nextbike Glasgow fleet since its launch in 2014 – the equivalent of cycling 28 times around the equator.

The 500,000th rental was clocked up by Blair McGuire who cycled 3.4km from the Kelvinbridge subway station to the Emirates Stadium station.

The 24-year-old marketing student, who lives in Glasgow’s Gallowgate, said: ‘I really can’t believe I completed the 500,000 journey, what an achievement.

‘I only started using the nextbike scheme back in July after my friend and I cycled home and I quickly discovered how much quicker they are than taking the bus.

‘Although I have my own bike, being able to cycle around without having to worry about locking a bike up is so convenient. I’m a true nextbike convert!’

Glasgow now boasts 500 bikes and 62 stations across the city. nextbikes are available 24 hours a day and users can register and hire bikes in just a couple of minutes. The cycle-share scheme is one of the cheapest ways to get around Glasgow, with fees starting from as little as 16p per day.

UK nextbike managing director, Julian Scriven, said he was thrilled to see the scheme making new records and leading by example: ‘We have seen an incredible number of journeys across all of our schemes in the UK but Glasgow is still leading by example.

‘It’s wonderful to see that although the scheme has been established in the city for just over four years Glaswegians are still discovering the bikes for the first time and completely changing their journeys in favour of two wheels.’

Councillor Anna Richardson, city convener for Sustainability and Carbon Reduction said: ‘Achieving half a million hires is an amazing milestone for nextbike in Glasgow.

‘The figures clearly show that people increasingly want to get about on a bike and are finding nextbike easy and convenient to use. The number of nextbike stations in Glasgow has gone up in the past year, making the scheme more accessible across the city.

‘We are anticipating more bike stations to be installed over the coming year and so we should see still further growth in the scheme’s popularity. I am delighted that more people are taking to cycling in Glasgow – it’s good for Glasgow and the citizens of Glasgow.’