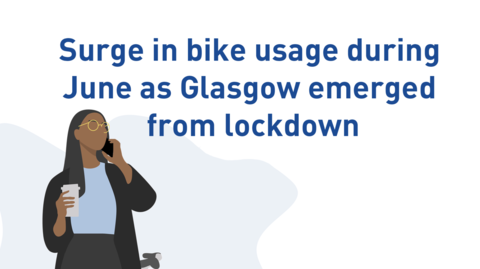 An impressive 16,876 new customers also registered for the scheme, bring the total number up to 72,530.

Glasgow currently has 650 standard bikes and 63 e-bikes, with 79 standard stations and 21 electric stations across the city.

“We believe the increase in customer numbers and rentals is down to a number of factors, including people’s reluctance to travel on motorised public transport during the pandemic and the fact that we offered free cycling vouchers as a helping hand to key workers across the city,” said Ms Solheim.

“We’re hoping that now that people are starting to move around more frequently and freely, they will continue to include cycling as part of their daily lives. By making the simple switch, our customers are helping to reduce carbon emissions and congestion in the city, and are benefitting from the mental and physical health benefits that come with jumping on a bike.”

Nextbike, which has more than 200 schemes across the globe, is also hoping to sign up more businesses to its corporate membership scheme in the hope it will encourage commuters to make a greener, healthier commute.

Businesses currently have the chance to purchase half-price corporate memberships for as little as £2 per person, giving their employees access to free 30 minute cycling rides across the city.

Ms Solheim said: “We’ve all got an amazing opportunity to take a step back and look at how we could all do things differently – and Glasgow’s businesses have a huge part to play.”