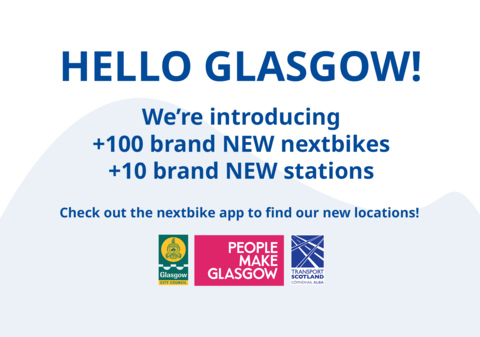 One-hundred-and-sixty extra bikes and 16 additional stations are being added to Glasgow’s popular fleet of nextbikes this year as the city celebrates a milestone of 1.25 million rentals.

One hundred of the new bikes will hit the streets over the next few weeks, along with 10 new stations, as the scheme expands its network across the city.

The remaining 60 bikes and six stations will be added to the expanding fleet by the autumn.

Since the scheme launched in 2014, Glaswegians have clocked up an impressive 2.1 million km on nextbikes, saving more than 522 tonnes of CO2 in the process. The city now has 147,440 registered users.

The new bikes are nextbike’s latest model - the Smartbike 2.0. They have the benefits of improved security, locking mechanisms, and enhanced GPS tracking, with a slightly different rental procedure to the existing bikes.

Krysia Solheim, nextbike UK MD, said: “We’re delighted to be introducing these new bikes to the Glasgow fleet, especially in the year that COP26 take place in the city and the focus turns to halting climate change.

“Our Glaswegian customers have hit an incredible milestone with 1.25 million rentals, and we hope more people continue to choose to hop on a nextbike instead of jumping in the car to get around Glasgow. It’s the individual choices that we all make like this every day that can add up to having a huge impact on CO2 levels, not to mention the mental and physical health benefits that come with cycling.

“We’re also excited to be expanding our network of stations into areas that previously haven’t had direct access to a station. We’re keen to ensure that as the fleet grows, it is as inclusive as possible and doesn’t just service the city centre.

“They can be rented simply by scanning the QR code or entering the bike number onto the app, in a similar way to the city’s e-bikes and standard fleet. They will still need to be returned to an official station in the same way as the rest of the fleet.”

The new bikes have been funded by Glasgow City Council.

Andy Waddell, Director of Operations for Glasgow City Council, said: “Glasgow’s cycle hire scheme is a huge ongoing success and has played a major role in supporting the growing interest in active travel across the city.

“This latest investment means that we will surpass the original target of 1000 bikes at 100 Nextbike stations well ahead of time and give us a great platform to build a city-wide network.

“This phase of the programme ensures that hire bikes will be seen in many areas of Glasgow for the first time and will help to make cycling a more accessible travel option in an increasingly diverse range of communities within the city.

“Getting more people on a bike on a more regular basis is essential if we are to achieve Glasgow’s target of carbon neutrality by 2030. The cycle hire scheme therefore has a vital role to play in the city’s effort to tackle the current climate crisis.”