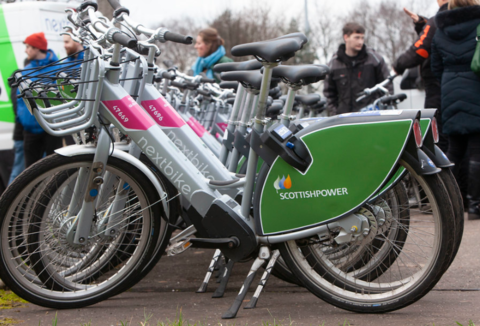 Twenty more e-bikes will be coming to the streets of Glasgow this week as the popular nextbike bike share scheme expands.

Five e-bike stations will also expand to accommodate the new e-bikes as part of the expansion, which will also see 43 additional e-bikes and 16 electric stations being added over the coming months.

The e-bike fleet, which was launched last October with 63 bicycles, will eventually have 126 bikes and 37 electric stations once the expansion is completed.

Customers have already clocked up more than 29,000 rentals on e-bikes around Glasgow to date.

E-bikes are a combination of a conventional bike with a motor that take some of the effort out of pedalling for the rider, which means the e-bikes can cover greater distances faster and with less effort.

Nextbike MD, Krysia Solheim, said she hoped that expanding the fleet would mean even more people could take advantage of the e-bikes.

“It’s great to see the e-bike fleet expanding after a solid first year, thanks to the investment from Glasgow City Council.

“The e-bikes have proven an incredibly popular and affordable way to get around the city, and by increasing numbers, the hope is that customers will be able to start using them much more frequently as a reliable alternative mode of transport.

“E-bikes are a great way of increasing inclusivity and getting people of all abilities and fitness levels into cycling, in addition to allowing people to reduce their journey times and to tackle Glasgow’s steep hills with ease.”

The e-bikes, which join the existing Glasgow fleet of 770 standard bikes, were made possible by a joint funding initiative from Glasgow City Council and the Transport Scotland eBike Grant Fund, delivered by Energy Saving Trust.

Councillor Anna Richardson said: “There’s been such a fantastic response to having e-bikes in the hire fleet that expanding the number available was an obvious next step.  The new investment almost doubles the number of e-bikes and charging stations for the nextbike service and underlines our commitment to encouraging cycling in Glasgow.

“E-bikes help make cycling more accessible, especially for those who are building up their fitness or need to make a longer journey. The e-bikes also open the door to cycling more generally and a greater bike use across Glasgow is essential if the city is to achieve its carbon reduction targets.”

Electric bike rental will not currently be covered by current memberships. Customers will be able to rent the e-bikes using their existing nextbike accounts. Rides will be charged on a pay-as-you-ride basis at £2 per 20 minutes or £30 per day.

Stations that are expanding from 4 to 8 docks: