Another 27 Nextbike locations have been announced for Cardiff 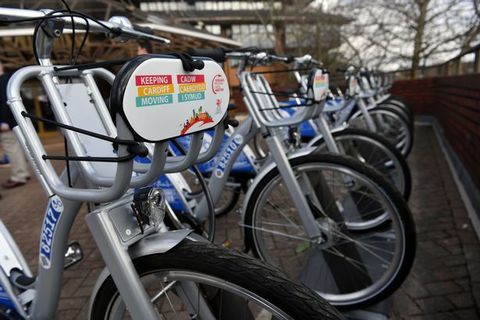 Cardiff's popular bike-sharing scheme is expanding again with 27 new locations announced. It means the scheme is more than doubling in size. Currently there are 25 stations, which is increasing to 52 on September 3.

New docking stations will be installed in Llandaff, Grangetown, Heath, and Ely, as well as several around Cardiff University. A new station will also be created at the Wales Millennium Centre in Cardiff Bay.

The scheme sees users pick up a bike at docks around the city. The charge depends on how long they have the bike for. The standard pay as you go charge is £1 for 30 minutes riding.

The first 30 minutes of every journey free for annual subscribers.

Where the new nextbike stations will be

The bikes have also been used an average of five times per day and have been rented 53,000 times since they were first introduced into the city but it has led to problems with availability.

Nextbike, the world’s most extensive bike-share operator, recently revealed the city’s 16,000 registered users have already cycled an impressive 140,000km since the scheme was launched in March – the equivalent of 42 times the distance Geraint Thomas cycled in winning the Tour de France.

Managing director Julian Scriven said he hoped people would be happy to see the extra stations being installed.

“Demand for the scheme has been phenomenal in Cardiff since we launched,” he said. “While this has been amazing, at times it’s been clear that we’ve needed more bikes and stations to keep up with demand.

“We’ve listened to our customers to see where they want to see new stations and we’ve tried hard to take this into account when planning new locations with Cardiff council, such as in the Llandaff area.

“The larger the scheme grows, the more reliable it becomes as a viable alternative for people looking to change the way they commute to work and get around the city.

"It’s important for us to ensure that bikes are available not just across the city centre area but in the outlying areas to ensure all members of the community are able to access and benefit from the scheme.

“With this in mind we’re currently in talks to see how the scheme could be expanded further.”

Council cabinet member Caro Wild said: “It is great to hear that Cardiff has had the most successful launch in the UK.

“The scheme makes cycling accessible to the public and it is fantastic to hear that the scheme continues to be popular.

"With the scheme now doubling in size there will be more bikes available, especially in outer city areas which will hopefully encourage even more people to cycle into and around the city.”

What it's like using a Nextbike in Cardiff, by Ruth Mosalski:

When I first moved back to Cardiff I had vowed to cycle to work.

When I was a student in York I cycled everywhere, because everyone did.

So, I dug my old bike out, updated my safety (and rain) gear and was raring to go from my home in Roath to our city centre offices at Park Street.

The route included one of the "bike lanes" on Newport Road – a lane you share with buses on one of the city's busiest roads.

After a close call on an icy winter's day, the bike was stuck in the shed and it's remained there ever since.

Then Nextbike delivered a rack of bikes just a five-minute walk from my house.

May as well give it a go, I thought.

To get going you need to download the app and add your credit card details.

If you sign up for a monthly or annual pass it costs £5. But as an early adopter I got it for half price – so £2.50 a month for unlimited free 30-minute rides.

If you need your bike for longer, each additional 30 minutes will cost 50p. Your maximum charge on a day is £5.

To contrast a single Cardiff Bus fare is £1.90.

Having seen people rave about the Nextbikes I was weighing up whether I should get a better second-hand bike but, having talked it through with cyclist friends and with their vastly superior knowledge, we worked out the cost of hiring a bike each day was probably better than maintenance or buying a new bike at least while I test out how much I use it.

My first outing was on a day I was starting work at 8am – so the roads were quieter – and my route has changed from four years ago as we've moved house and now includes quieter roads, where bikes are common and the (proper) bike path off the side of Boulevard de Nantes.

Granted, it was a glorious day, but it was a lovely ride to work.

The bike is light, the basket at the front holds my handbag, and they are easy to lock and unlock.

I arrived in a third of the time I would have if I'd walked or about 15 minutes quicker than if I'd been dropped off in the car.

Since then I've done journeys to and from work.

So far I've been pretty lucky that I've always managed to get a bike from home to work but getting home has been a little trickier.

The nearest rack to our office is in St Mary Street and it's often empty so hopefully these new racks will mean we can get bikes more regularly.

During the Eisteddfod in Cardiff Bay I saw tens of people using the bikes to cycle down the sunny Lloyd George Avenue.

Nextbike has said they've had problems with people not returning the bikes properly and has emailed users a few times to remind them.

They are trying to smooth out that problem but others remain – colleagues have had problems with the GPS and I've stopped using their map to check availability as it's so often wrong.

I'm loving being back on a bike but am seeing all the things I've written about cyclists complaining about plenty.

Drivers not giving enough space, no proper cycle lanes and the potholes and damage to the bus/bike in Kingsway makes me take a deep inhale of breath every time I approach it.

The only other thing that makes me nervous is how many people are now using bikes, sometimes on busy city roads, without a helmet.

With more people using bikes, and a Cardiff lad having won the Tour de France, we can only hope improvements to roads and cycle paths will follow.